I have been a fan of Kendrick Lamar for quite some time now.  To see how much he’s grown as an artist is just simply amazing. The first time I saw him live was back in 2009 or 2010 at 1OAK in Las Vegas. The next time was at an intimate art gallery space in Brooklyn.  I’ll save the story behind how I finessed my way in but it was definitely worth it seeing that it was right after the release of Good Kid Maad city.  The time after that, I saw him again in  Brooklyn, Williamsburg to be exact, and he did a show for like $10 or $15.  This was around the time the Meek Mill beef was introduced  and quickly ended once Kendrick made it clear he was not a force to be reckoned with.  The next time I saw him live in concert was right after my birthday celebration in Vegas in 2015.  I literally hopped off my flight and went to Terminal 5 in New York to catch Kunta’s Groove Sessions.  Something about him and his performances that I never want to miss.  So here we are now to speak about the DAMN Tour.

When the album first released I couldn’t wait to hear it.  There was so much anticipation for it.  I wanted to know the theme he would have for this one, the overall tone of the album, if any artists would be addressed, etc.  After hearing the complete project,  to say I was elated would be an understatement.  I listened to both Element and Lust over and over again, loved the vocals from both he and Rihanna on Loyalty, reminisced about my own childhood with Fear and smiled uncontrollably on my train ride to work when I heard ‘God’.  At the time when the news about the DAMN Tour was released,  I stayed in New York and decided that I wanted to experience the show in Los Angeles.  Fast forward a few months and I not only relocated to California but kept my wish and saw Kendrick live at the 2nd show in Staples Center.  To be able to attend the show in LA meant everything to me.

Before the show, Kendrick tweeted about a pop-up being hosted at Blends in Downtown Los Angeles.  Of course I stopped by and was able to snag a tee.  The wall was plastered with the iconic picture from the DAMN album and filled with merch including DAMN tees, coach jackets stamped with ‘Pray for Me’ on the front and tour dates on the back, hats and hoodies.  The pop-up setup was very simple but effective.  Okay now I can re-focus on the tour highlights. 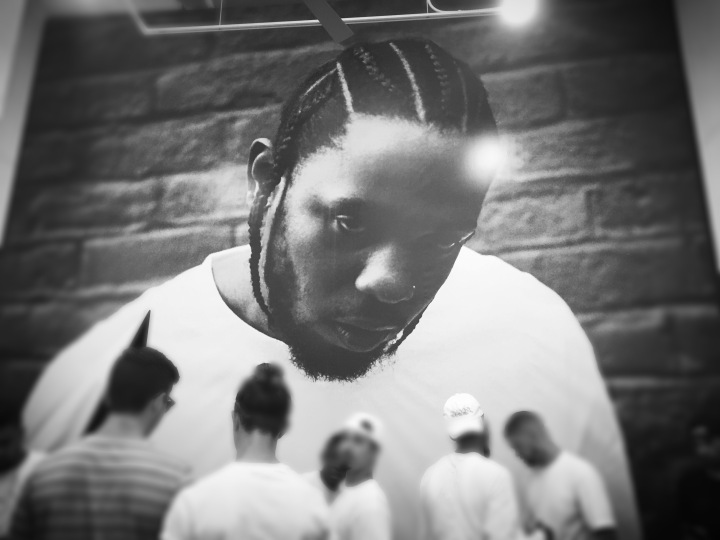 The tour opened with the high energy of DRAM and Travis Scott.  Both did a phenomenal job live but the performance from Travis Scott on the eagle throughout his set was pretty epic.  The Butterfly Effect and Goosebumps would have to be my favorites of the night from him.  Now it was time for Corn Row Kenny himself to make an appearance.  The moment was finally here.  A brief news clipping aired while smoked filled the stage and then Kendrick appeared with a yellow tailored fit for his DNA opening performance.  The crowd went wild!  As the night continued, Kendrick stayed true to the Kung Fu Kenny theme with interactive film scenes and live fighting scenes to add to the theatrics of the show.  Although this was a tour for DAMN, I loved how he gave the audience hits from prior albums.  He comforted us with  “Alright” and let us knew that no matter what even when being tested in this thing we call life, we will be alright.  The momentum of the crowd continued to heighten with each song from Good Kidd Maad City including ‘Money Trees’ and ‘Swimming Pools’ and we even got to his infamous untitled album with his performance of  ‘Levitate’.  Everyone sang every word and we even got to show our true talent with our acapella version of ‘Humble’.   I watched all of the performances of each song in pure amazement and awe.  I know I actually experienced this show to the highest potential because I didn’t get a lot of video.  I wanted to be in the moment and actually enjoy the show.  The final song the Compton born legend performed was very fitting; the song entitled ‘GOD’.  I will continue to follow him throughout his musical journey and I’m so glad he shares his life and experiences with us through his lyricism.  You may not grasp the full message the first go round or second or third.  But once you really listen and consume his music the way he intended, there are meaningful and powerful messages throughout each album.  Kendrick Lamar I thank you!  Enjoy my instastory below and a few snapshots of the pop-up.